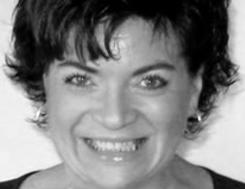 ​​​​This weeks Superhero Spotlight goes out to Kim Hansard. Many of you in the Knoxville area know her from Star 102.1 and the hit morning radio show, Marc & Kim in the Morning. I have gotten to know her through her valiant and successful battle against breast cancer.

​I will never forget when I first met Kim in person. She was so bright and full of energy that it was contagious. I could see immediately why she was so popular with so many people, because you felt as if you knew her after her only five minutes. We met through Twitter when I was doing a quick fundraiser for breast cancer awareness.

​Kim is somebody who found her true identity as a Superhero as a mother to one, a wife to one, and an inspiration to many through her battle. she continued to work hard, be a phenomenal mother to a child she adopted and brought in to be her own, and did what she could to advocate for other breast cancer fighters.

​Kim is proof that being a Superhero to so many doesn't come from what you have, what you do, or where you are, but who you are when you need a Superhero for yourself. She proved to be that I can be my own Superhero, and I will be forever grateful for that.

​Kim, you continue to capture the region with your voice, but you will always be known for capturing the world with you fight against breast cancer.